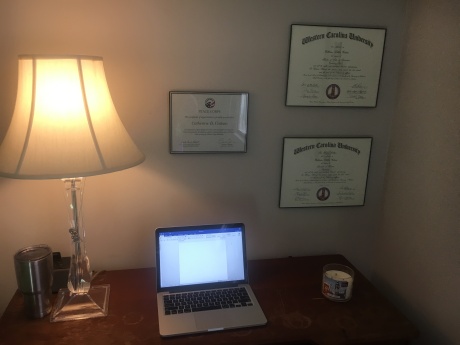 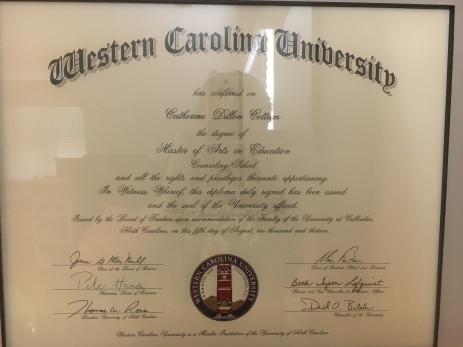 This post is going to sound like an Ode to Catherine and I apologize for that.  I’m usually self deprecating and have very low self-esteem, so writing this will be a big challenge for me, but I feel that it needs to be done.  My therapist recently suggested to me that I start celebrating ALL achievements, no matter how small or insignificant they seem.  I have a really hard time doing that, but this post will be an attempt at celebrating some achievements.  It is my goal to be kinder to myself and celebrate achievements, no matter how small, in the new year.  It’s not a resolution, exactly, but rather a way I’d like to live my life differently in small ways to make it better.

I’m writing this post for a bad day and saving it in my drafts on WordPress in hopes that I will read it and post it when I’m feeling down.  (Author’s Note: I’m not feeling particularly down on the day of posting, but for the past few days I have been incredibly apathetic and haven’t really felt any motivation or felt like doing a single thing, so I thought it would be a good time for me to re-read this post and send it out into the world.) . Today is neither good nor bad, but I’m making an effort to be positive and optimistic in this post.  Last night, I had my dad help me hang the above items above the desk where I write as a reminder that I have accomplished things, even though it often doesn’t feel like I’ve accomplished anything at all.  Even though I didn’t complete my Peace Corps service, I went and I tried and that is more than most people can say.  I even lasted five months before having to come home and it wasn’t really my choice to come home, though I did have a say in whether or not I stayed home and I simply wasn’t well enough to go back to South Africa.  I lived in rural African villages for five months.  How many people from America can say that?  That certificate is signed by the(n) President of the United States, Barack Obama, which is very cool and makes me feel proud.

I did well in both my undergraduate and graduate course work in spite of battling crippling depression, anxiety, and migraines.  I don’t know if you can read it, but that undergraduate degree is from the Honors College at Western Carolina University and it says “Magna Cum Laude”, which means “with great honor” or “with high praise.”  I graduated with my B.S. in Psychology with a 3.802 GPA and with my M.A.Ed. in School Counseling with a 3.944 GPA, so when I look at it objectively, I did very well in School.  I also graduated high school with a 4.3 GPA, but I don’t suppose high school really counts anymore at this point.

I asked for help when I needed it this summer and checked myself into the psych ward even though it was the scariest thing I’ve ever done.  It turned out to be the scariest and the best thing I’ve ever done for myself.  I take all of my medicines as prescribed, go to all of my appointments with my psychiatrist and counselor, and generally work very hard at my mental wellness.  I don’t drink or do drugs, which is kind of a big deal for a person who has Bipolar Disorder.

I advocate for myself with my doctor and therapist when it comes to my illness and my well-being.  I ask questions and participate in my treatment planning instead of just sitting back and letting my providers make all of the decisions.  The three of us agreed training River as a service dog would increase my quality of life, so I’ve gotten River trained (with financial help from a couple of other people).

I wrote three children’s books recently about my service dog, River the Wonderdale.  I submitted them to several agents and a publishing company.  I heard back from the publishing company asking for copies of my manuscripts, which I sent them immediately.  I’m waiting to hear back from them about whether or not they are interested.  I have compiled journal entries and blog posts to use to write a memoir about living with Bipolar Disorder and I start a memoir writing class on January 17th at my local community college.

I stand up for what I believe in and will be marching (or maybe will have marched by the time this has been posted) on Washington in January for the Women’s March on Washington.

Lately, I haven’t been sleeping for 12 hours at a time.  I was going to sleep between midnight and 2AM and waking up around 1PM.  I’ve been going to bed at a reasonable time and waking back up at a reasonable time as well.  This is because of a great new medication I’m taking, but it’s a medication my therapist suggested that I then asked the doctor for, so I’m counting it as an accomplishment.

I guess what I’m trying to say is that there are a lot of bad, dark, scary, shitty things in my life, but there are a lot of light, bright, great, wonderful things, too and it’s time that I start doing my best to acknowledge those and the part I play in bringing them about.

I live in the beautiful mountains of North Carolina :) View all posts by cdcottam